The Long Harbour Classic is now a one day regatta (it goes without saying that old guys are not really keen on a second day on creaky backs and wonky knees). The 2023 Classic will be held on on August 19, 2023. Details to Follow.

It was a great day with 4 races in a flood tide and gusty SE’er with lots of hiking to keep the 12 Lasers and 2 Lightnings entertained. It was nice to see pre-covid numbers of attendees.

on Martin did not need his nearly dead old guy points while winning 3 of the races to best the rest of the fleet. Matthias Heinemann was a consistent performer and came second and former champ Thom Stubbs decided to test the water temperature in the first race which pushed him back to third. 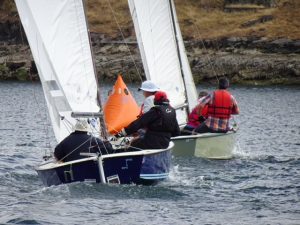 The 2 Lightnings raced the same silly courses as the Lasers and decided to trade 1s and 2s with each other. Jeremy and Tara Smith ended up beating Bill Cote on a double tie breaker

A big thank you goes out to the hard working race committee. Michael Shepard on flags, OM Ron Mackenzie on the horn, and Chris Sanderson in the mark set boat. None of them are admitting who missed the Sesame Street episode sponsored by the Number 4. And a special thank you to Jean Panepinto for supplying the action photos.

And In breaking the news, the CFL was DFL. 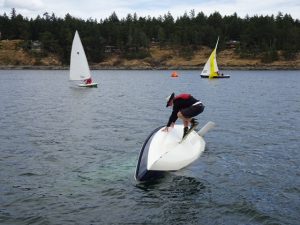