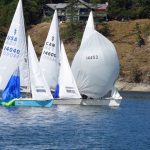 7 Lightnings from SPOG, Kits YC, RVanYC and the Vancouver Lake fleet appeared for the inaugural Scott Point Invitational. It is clear that the locals were intent on making the guests feel welcome by letting them sail to the front of the fleet. In the usual weird shifts that accompany a westerly wind in Long Harbour, the crews from Portland and Vancouver lead the SPOG boats around the course all 6 races over 2 days.

Saturday featured four short races against the ferry, as well as each other. This was followed on Sunday by an unusual long distance race that took the fleet out of Long Harbour, across Captain Passage with a gushing 4 kt ebb current, and over to Owl Islet – and back again. This was followed by 1 shorter race to complete the racing schedule. 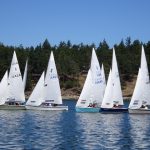 Tied for fear on points after 6 races was Ran Vered of Kits YC and Roger Hicks from Vancouver Lake, WA , followed by Menno Bos, also of Kits YC in 3rd. Following a count back, Roger Hicks and crew (Stuart – thanks for the cookies) aboard Roaring Forties are the winners of the 2019 Invitational.