The Round the Isles is the early season (June is early for the Old Guys) Opener race that explores the islands, rocks and waters of Long Harbour. It is not unusual to have to portage and even do some crabbing along the way. The winner claims the Ballantyne on the Rocks Perpetual Trophy commemorating  Jim Ballantyne’s unfortunate navigation error at Dodds Narrows. Jim Ballantyne (1929-2014) was the Commodore’s father, a legend of Scott Point, and the inspiration behind this make-shift club.

2019 Round the Isles Opener Results

The opening event of the 2019 season sailed on Saturday, June 15. The fleet of 10 lasers and 4 Lightnings (one possibly not a Lightning) had a glorious day of racing in pure sunshine and perfect SE thermal wind. Special thank you to Race Committee consisting of Allan Sturgess in charge of flags & horns, Russell and Jane Poulston and Andrea and Steve Bayley on the rescue boat, and Jean Panepinto on the camera. 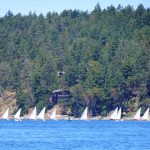 Don Martin’s perfect start and correct reading of the lay line put him in the lead at Fisherman’s Island – the first mark. Without the need to portage across the sand bar, Don lead Greg Slakov and Chris Sanderson down the long run to Eagle Mar deep into Long Harbour. A little more tricky was the long beat back to Fisherman’s with a number of places being traded and Don and Greg duelling neck and neck at the front. A second lap around Clamshell Island in a building SE saw some extreme hiking (extreme for Old Guys) with Don fending off Greg to win the first race with its double scoring points. 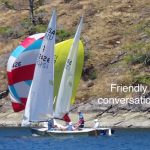 In the Lightning fleet, John Walker’s No Name duelled with Martin Herbert’s Kay D through the first lap. Becoming aware of possible navigation hazards, Bill Cote decided to use Azzuri for some hydrography and can now claim the discovery of Bill’s Rock – a previously unknown reef deep in Long Harbour. 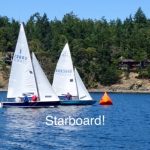 On the upwind beat, it turned out John had failed to listen to right person about race instructions and did not realize there was a second lap. Martin took advantage of this faux pas to lead Azzuri on the second lap all the way to the Finish. 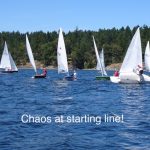 The second race was a “short snapper” between BC Ferry movements featuring a bit more wind to keep racers on their toes. Don Martin again lead start to finish in the Lasers pipping last year’s champ Brian Woodward. And given it was only a one-lap race, John Walker could not repeat his mistake about the second lap, and lead the Lightnings.

On the strength of two first place finishes. Don Martin takes home the Ballantyne on the Rocks Trophy for the lasers. And after a bit of discussion on whether Martin Herbert’s Lightning was indeed a Lightning, it was decided that having a fixed keel and looking a little different than most Lightnings did not constitute “extreme” cheating and Martin wins the Rusty Lantern with a first (counting double) and a third place finish.