The 2023 Moby’s Marathon will be sailed on July 15, 2023. We have already asked Dale to put his order in to ensure ample supplies of Guiness will be on hand. More Details to follow.

It was the usual Moby’s Marathon – the premier long distance race of the SPOG season. Light winds at the start lead to a long, light 1.5 hr downwind run into Ganges Harbour with Moby’s Pub beckoning. After Heidi and the great staff at Moby’s served libations and burgers, the fleet was ready to re-launch for the long upwind slog into a building SE wind to get back home.

Proving once again that Guinness makes the difference, Steve Kinsey belatedly realized that it is an important part of the competition and managed to down a pint of the black nectar. It was a good thing as he was in a tight race with the more experienced Allan Strain – who likes his Guinness. 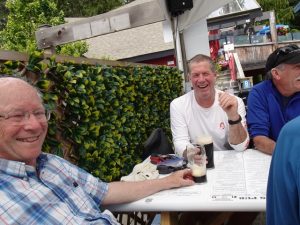 Allan had a 2nd and 5th and used his age handicap to end up in a tie with Steve Kinsey who had a 1st and 3rd. But with the belated Guinness and by nature of his 1st, Steve won the tie breaker and Mother’s Flower Bowl.

In the Lightnings, Bill Cote’s Azzuro lead Gordie May’s Revenuer around a race course in Long Harbour before both crews rushed to Mobys to join the others for lunch. Feeling satiated, there was no need for a second race.

Many thanks to the Race Committee of John McCorquodale and David Dale-Johnson. John over-achieved by agreeing to pilot the CFL’s boat for the start and half of the second leg before realizing that a drain plug was a necessary part of a laser’s equipment.