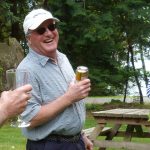 Doug Baxter sailed off the course in 2014 after a battle with cancer. Doug was a life-long sailor (he will be forgiven for his short bout of power boat ownership), enthusiastic racer, and all-around great guy. Doug’s quick smile, hearty laugh, love of the water and attention to detail will be long remembered. The Doug Baxter Memorial Closer is now the last official race on the SPOG calendar, and a last chance for results to secure the season point championship. The Closer is a one day affair with a number of short races. The winner gets to claim Doug’s Whiskey Jug – what looks like a cream jug stolen from a nice hotel restaurant that Doug used for the water with his single malt.