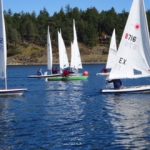 A wonderful fall day greeted the 10 hearty SPOGgers who came out to compete in the final event of the season. Plenty of sunshine, some warmth to the day and just enough wind to get 3 races off. Brian Woodward posted a 1-3-1, which was enough to beat Allan Strain’s 4-2-3 and cover the age point advantage. Brian wins his 2nd event of the year and takes Doug’s Whisky Water Jug for 2018.

Tired of being beat by the city-slickers, the SPOGgers living on Salt Spring decided to have their own championship. And what a day to have it – perfect conditions – sunny and with a gentle westerly. After a rare protest was disallowed (over several beer at Moby’s), Bob DeRoos’ first and second place finishes held up to take home the Locals Spittoon.

Day 2 of the Classic was all out war in somewhat sketchy zephyrs. The 1st race had to be abandoned as the wind died and the ferry threatened to treat the fleet like speed bumps. When we finally got a race off,  Greg Slakov finally found his defending champion form to win the race, with Brian Woodward in 2nd, Thom Stubbs in 3rd and Hart Buck in 4th. With 2015 champ Stubbs holding a 1 point lead over 2017 champ Buck, it was going to be a match race. After 2 General Recalls, the race was on. Hart used his wily experience to put 2 places between him and Thom to win the race and the regatta.

Bill Cote and his crew on Revenuer finally had some boat on boat competition in the Lightning fleet. With 5 wins in 6 races, they add another tag to the Lantern Trophy. But Robert Shoore wins the Best in Show prize for his wonderful Lightning restoration.

After the longest, sunniest summer on record, Day 1 of the Long Harbour Classic started in a cold drizzle. But the SE wind was perfect, even if the shifts caused some anguish. 5 races were put on the sheet before ferry traffic and general fatigue brought things to a halt. Former champs Thom Stubbs and Hart Buck – both Old Guys (over 50, less than 60) are even at the front of the pack going into Day 2. goes on August 25, 26. Among the bulk of fleet of Older Old Guys and Really Old Old Guys (over 60), Brian Woodward, Hugh Jarvis and Allan Strain are duking out.

What can we say – the guys likes racing to win where there is beer involved.

The fleet of 12 lasers and 2 big boats (actually a Lightning and a Flying 15) survives highly changeable Westerly winds, an ankle deep portage across the Fishermans Island sandbar (with a few barnacly rocks), and total calms at Surge Rock.  A large number of capsizes and even one abandoned boat were testament to the challenges.

Allan Strain handled it all with aplomb racking two bullets and taking home (figuratively) the Trophy. Allan Sturgess kept his nose clean for a 5 and 2 and second place. And clearly Steve Whilte has learned to gybe in heavier winds as he went error free for a 3 and 6 and ended in 3rd place. With 2 wins Bill Cote’s Revenuer added another Lantern Trophy win to his collection

The Closer is a one-day series of short races around various bits(floating and otherwise) and floating debris of Long Harbour. Races are planned for Saturday. But based on past experience, races might be postponed until Sunday is weather promises to be better. At stake is the Doug’s Whisky Water Jug trophy and the Season Championship.

There will be a Pot Luck dinner in the RVYC Pavilion on Saturday night. Please bring your own meat for BBQ, Booze and either an appetizer, salad, or dessert to share.

Two days of perfect Salt Spring weather, great course conditions, and close racing all contributed to a memorable 2017 Classic. Hart Buck duelled with young hot-shots Brad Woodward and Fraser Buck on Saturday and was sitting pretty after handicaps on Day 1, despite not sailing the right course in Race 2 (the Race Committee may have had it in for him). But Hart had to catch the tide on Sunday leaving an interesting wide open battle for honours. Steve White had a good Saturday after a slow start, and hung on on Sunday to beat Greg Slakov by 3 points and Brian Woodward by 4, and take home his first Kerr Trophy win.

A point of privilege regarding Rule 15.4 at Moby’s Marathon was brought the O.M. for clarification. His decision “A definition of a beer (more properly a Guinness) is to interpreted as a full beer, not a partial beer. As a minimum, it would be the smallest size normally available at the establishment (glass, pint, sleeve, etc.).” As a result Brian Woodward will be granted redress for Moby’s Results and will share the win with Don Martin (but there is only room for Don’s name on the trophy).

The annual long distance race to the Pub and back sailed on Saturday, July 15.

In the Laser fleet, Don Martin took a successful flyer on the second leg to overcome a 6th place in the first leg and went on to win Mothers’s Flower Bowl. Bill Cote on Revenuer took advantage of a zephyr at the finish of race 1 and split the two legs with John Walker’s Caprice – but Bill used the extra beer rule to his advantage and claimed the Lantern Trophy.

Tim Slaney Wins the Round the Isles Opener

The opening event of the 2017 season sailed on Saturday, June 17, 2017. In a stronger than expected southeasterly, the shortened fleet survived with a minimum of capsizes and a maximum of sore backs from hiking. That is, except for the the Lightning Division who seemed to cruise around Long Harbour unaffected by the need to hike.

With a 1st in the 1.5 hour Race 1 (with double points), Tim Slaney outpointed the competition to win the event and the Ballantyne on the Rocks Perpetual Trophy. Bill Cote’s Revenuer (why don’t the lasers have names?) won the tightly contested Lighting Division and is the inaugral winner of the Lantern Trophy.

The local big sailing event of the year, the Round Saltspring Race, was run in light and capricious winds over the Victoria Day weekend. SPOG was well represented with 4 boats skippers by SPOGgers (Buck’aneer, Revenuer, Strait Marine and Surfrider) and other SPOGgers were noticed among the crews.

The only one to actually survive the calms and currents was Jim Allan’s Strait Marine which was second boat to finish, and placed second Overall. On the strength of Jim’s finish, SPOG was runner-up for the UK Sails Challenge Team event.

Bill Cote on Revenuer won the Environmental Awareness award in recognition of the smallest carbon footprint and the fact that the Lightning was rescued from a trip to the dumpster and put back into service.

The Commodore is sorry for the bad press associated with his working life in the pipeline business. To make amends, he has committed SPOG to a Clean Regatta and certification by Sailors for the Sea.

Initiatives for 2017 races will include: 1-No Plastic Water bottles -a drinking water station will be provided; 2-Encourage maximum recycling of empty beer cans; 3-All lasers will be required to use the new Scott Point pump-out; 4-SPOG to work on fish habitat enhancement efforts at Scott Point; 5-Use eco-certified cleaners for lasers – actually you cannot wash them anyway; 6-Make bilge absorbents available for all boats at Scott Point; 7-Reducing paper – all notices and results to be circulated by email only.

We can all do our part.