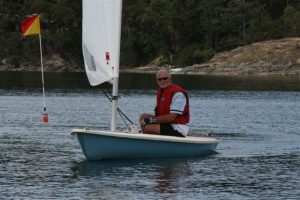 Today SPOG announces a new handicap category for those 80 and older. SOOG’s are Super Old Old Guys and get at least 4 or 5 points per race. Ron McKenzie, SPOG’s very own Ornery Measurer and inspiration for the whole damn thing, is the first SPOGger to reach that mighty milestone. We are sad that we cannot be with Ron and Joan to celebrate, but look forward to seeing Ron on his ancient laser “Mr. Bil” on Long Harbour this summer.

Amid all the dreariness of the pandemic, a major milestone has arrived. The Laser (also known as the Weekender and now the ILCA) conceived and built by Bruce Kirby and Ian Bruce was first unveiled 50 years ago and has become the most popular dinghy ever. SPOG will participate in a world-wide event on September 11, 2021. More details to come.

At long last Dr. Bonnie has laid out a path to vaccination and the easing of the restrictions which kept SPOG at bay in 2020. While current health orders restrict sailing competitions and social gatherings, it is possible that restrictions will look different as we head into summer. On the off chance that SPOG can resume, here is a draft schedule for 2021.

Round the Isles Opener – June 12

Locals Championship – to be determined

In these Covid times, a small number of islanders sailed to Mobys and back, and continue to go for a sail on Wednesday afternoons. But unfortunately it is not appropriate for the larger events with more socializing to proceed at this time. So without on-the-dock beers and a nice a dinner, it makes no sense for the Long Harbour Classic to proceed as planned for Aug 29 and 30. And the Doug Baxter Closer is not likely to proceed.

But if you happen to be around Scott Point on a Wednesday, come out for a sail at 4 pm.

While the official 2020 Race was another victim of Covid19. A  local SPOGgers within a very small social bubble in 4 Lasers and 2 Lightnings took a pleasure sail to the much-reduced-capacity Mobys as a test for a possible SPOG event later in summer. 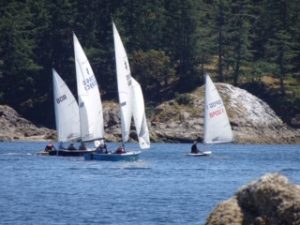 While this was a not-a-race race, there were results based on the fiction that Lasers and Lightnings can sail against each other using a system called the Portsmouth Yardstick. In the Final results one second of corrected time separated Chris Sanderson on 808 from Bill  Cote and crew on Azzuro on the inbound leg made Chris is winner (if that is the correct term) of the Moby’s-Marathon-Covid19-Compliant-Cruise.

Even with return to sport guidelines, BC Sailing and RVYC are not sanctioning dinghy racing at this time. And Moby’s has much reduced capacity and cannot take groups. So the official Mobys Marathon is off for 2020.

A couple of local islanders may go for a pleasure sail to Mobys and test some precautions which may allow a SPOG event to take place later this summer. Stay tuned and stay safe!

Jun 4/20 Round the Isles Opener Cancelled

Unfortunately the RVYC Scott Point Outstation will not be open to members on June 13 and RVYC is following BC Sailing policy which does not recommend competitive dinghy sailing at this time.

That said, recreational sailing is starting the open and a Lightning has been seen on Long Harbour – with appropriate physical distancing. And the CFL has had his Laser out – with regular dunkings to wash off any trace of Covid19.

It is expected that Scott Point will open soon and more recreational sailing can occur, creating opportunities for SPOGgers to sail together, even if racing and social gatherings will be restricted.

The world has gone crazy. Our sympathies are with those who have had direct contact with COVID19 or suffered through the anxiety of its impact on family and finances.

But on Salt Spring Island, it is hard to see much of a difference other than socializing is curtailed and Moby’s is closed.

At this time, SPOG is still hoping that the first race of the season can go ahead in some format on Jun 13, even if the social aspect of SPOGging is somewhat reduced. Please stay tuned.

The 2020 Calendar of Events is now official.

Round the Isles Opener – Jun 13

Nov 1/19 – A Tie for Season Championship

After a three races in the 2019 season, Steve White had a 2 point lead over 2018 Champ Brian Woodward. But Steve did the honourable thing during the Doug Baxter Closer and let Brian pass him multiple times. And so the two end up in a tie for 2019 at 28 points for the Season. Don Martin came in second with 23 points and Alan Strain and Greg Slakov had 21 points.

SPOG does not have a tie-breaking procedure and making one up later seems unfair. S0 all hail Steve White and Brian Woodward as Champs for 2019.

Saturday dawned with rain and calm – everyone’s favourite. However by the time the ferry left and we were able to start the first race, the sky had lifted and there was a light puffy, patchy northerly breeze in Long Harbour.  RO Russell Poulston started us off with two short races to U55 (green can) followed by a longer one around U55 and U50 (green can, red can).

The racing was tight and leads changed more than once in all races.  In the end the Laser rough scores were all within two points.  Don Martin won on the basis of being on the long side of a milestone birthday, followed by Chris Sanderson and Brian Woodward.  In the Lightning fleet, Revenuer showed great consistency winning with straight bullets.

In addition to the hoisting of Doug’s Whiskey Jug for the Closer, the Season Championship was still up for grabs. Steve White lead 2018 champ Brian Woodward by a measly 2 pointsgoing in. By virtue of their 5th  and 3rd  finishes in the Closer, there is a dead heat. Tie breaker news to follow when CFL gets home from France. 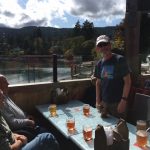 A beautiful day appeared after 2 days of solid rain. And a light and shifty westerly set up to make a perfect for the 5 SPOGgers who turned up for the SPOG laser race for locals only – no ringers, no city slickers. Competition was close in both races with several lead changes. Tim Slaney managed the wind shifts better than anyone else and accepted the spittoon over beers at Moby’s. Race Committee of Bill Cote and Paul Sturdy did such a great job, they were honorary participants in the race.

On an interesting Day 2, Steve White’s two 3rd place performances was not enough to hold off Thom Stubbs’ 1st and 4th. Thom wins the laser event by 1 point and puts his name on the Kerr Trophy for a second time.  John Walker and crew aboard Martini won the last race of the event, but that was not enough to beat Azzurro after Bill Cote put the hammer down to win the 3 middle races and the lightning class.

Story and Results for Day 1 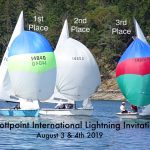 7 Lightnings from SPOG, Kits YC, and the Vancouver Lake fleet appeared for the inaugural Scott Point Invitational. It is clear that the locals were intent on making the guests feel welcome by letting them sail to the front of the fleet. After 6 races there was a tie between Roger Hicks from Vancouver Lake, WA and Ran Vered of Kits YC. Following a count back, Roger Hicks and crew aboard Roaring Forties won the 2019 Invitational.

Sailing to pub for a Guinness, then sailing back home. Add enough wind to make it interesting and plenty of sunshine, and you have the perfect day. 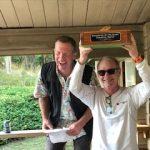 The opening event of the 2019 season sailed on Saturday, June 15. The fleet of 10 lasers and 4 Lightnings (one possibly not a Lightning) had a glorious day of racing in pure sunshine and perfect SE thermal wind. Results and Story Here.

Next up is Moby’s Marathon on July 13. The marina at Moby’s has mysteriously disappeared, so stay tuned for course revisions.

The Round the Isles Race goes on June 15. Bill Cote has already had his Lightning out in a local SSI round the cans race and Greg Slakov came third in his division in Round Saltspring Race (we won’t talk about the others). Now the rest of the SPOGgers need to get tuned up. Please check out these links sent by our friends at Calgary Yacht Club. “Laser Sailing: Sailing Backwards on the Start Line” … https://youtu.be/Lzl_ZS6blgk  and a link to all the ISA Tips and Tricks videos, https://internationalsailingacademy.com/category/tips-tricks/  You could spend all day!

A new event for 2019 focussed on Lightnings, but Lasers are welcome as well. The Invitational will be held on August long weekend – Aug 3-4, 2019. Sailing Instructions HERE.

Here is the calendar of events for 2019. Mark your Calendar now so you don’t miss an event.

Round the Isles Opener – June 15

There is a new event for 2019 – actually approved by the RVYC mucky-mucks to include Lightnings from other fleets. Weather Forecast – Lightning! (I like this name, but Bill suggests Scott Point Invitational) will be held on the August long weekend Aug 3-4. Lasers will be welcome too.

He was not a SPOGger and many might not know Andy Hunt; but he was the backbone of Laser Fleet 6 – BC and PNW. He not only loved sailing, but he worked tirelessly at all kinds of dinghy regattas including all (and I mean all) of the laser events held at Jericho Sailing and at Kits Yacht Club. As our District rep he was thorough in providing press coverage of local events (kids and masters) for the North American publication. Andy was also a very supporter of Disabled Sailing in Vancouver.

Andy recently passed away yesterday after a short battle with cancer. He will be missed on the race course and committee boat, and his absence will leave a big hole in local sailing.

Participation is part of the key to winning the Season Championship. Participation with great sailing is a guarantee to win. Brian Woodward started the day with a 1 point advantage over Allan Strain going into the final event. Brian’s win extended his lead to 2 points and he becomes the 1st 2-Time SPOG Champion.